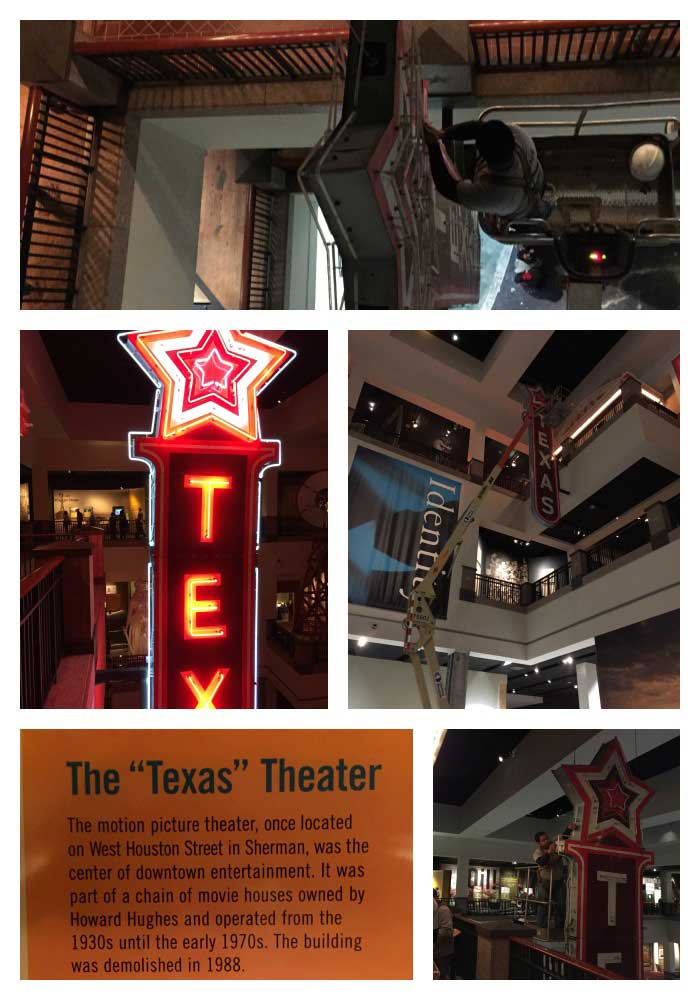 The Texas opened its doors on San Jacinto Day, April 21, 1931 and was touted as one of the finest show houses in the state. In a recent article it was said that the beautifully crafted marquee sign “…is adorned with a beautiful electric sign in front, an ornament not only for this town, but for a large city.  It carries 620 globes to illuminate it.  The top of the sign displays a white Texas star to symbolize the name of the theater”. Over the years the theatre and the sign itself became a beloved Texas landmark. On November 22, 1963 the theatre was the site of Lee Harvey Oswald’s arrest for the assassination of President John F. Kennedy, and the killing of Dallas police officer J.D. Tippit.

A.P. Mueller was the original owner and W. Scott Dunne was the architect. The Seguin Enterprise in a March 12, 1931 article reported Marvin Eickenroht drew the plans and Albert Nolte built the theatre. One of the innovations of the day was the accommodations provided by Western Electric for the hearing impaired. Certain seats were equipped with an apparatus which was connected directly to the sound system of the theatre so that people who were almost deaf could enjoy the shows. It was one of the safest theatres of the day and was constructed with concrete to help prevent fires. The theatre was known for its atmospheric beauty and was seen in several motion pictures during its lifetime.

The theatre was acquired by Aviation Cinemas, Inc. a division of Howard Hughes enterprises. Later in the 21st Century an attorney bought the original building in Sherman, Texas. The building was later demolished. CND Signs had the privilege to be the company chosen to move the historic marquee sign to the Bob Bullock Texas State Museum in Austin, Texas. We removed the sign and moved it to its new home in Austin so future generations could appreciate the beauty and majesty of the era in which the theater was built.

CND Signs has the experience and equipment to tackle such a large and sensitive job. We have access to a 110 foot crane and experienced installation and fabrication teams. No job is too large or too small. Contact CND Signs today and see the difference a local experienced and professional sign company can make in your next job.