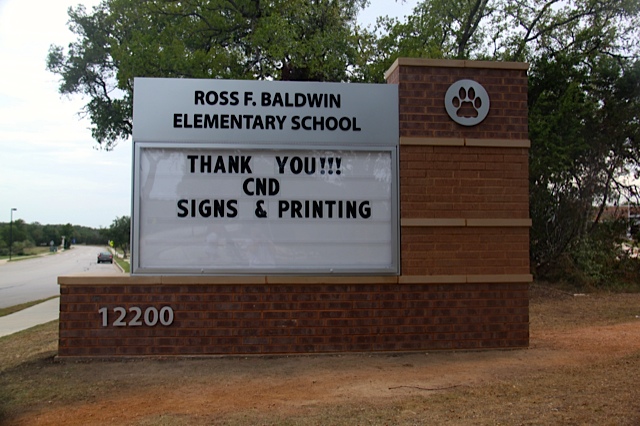 Four years ago, Ross F. Baldwin Elementary School became the newest edition to the Austin Independent School district. However, the school building still lacked a marquee sign. Initially, the Parent-Teacher Association, or the PTA, was responsible for raising the money. Two years later, after a couple of spring carnivals, fall bashes, and other fundraising efforts, Holly Andrepont, the chairperson for the marquee committee, was ready to hire a sign company.

Because Holly and the other PTA parents didn’t have any experience with this type of construction project, an acquaintance of Holly’s solved the question of where to start. She called CND Signs & Printing, per the recommendation of a former sign industry employee, and came into contact with Christian Martinez, president of CND Signs & Printing. Even though there were bids from four other companies, Holly decided Christian was the right person for the job. About her experience working with Christian, she replied she had nothing but good things to say. “He came highly recommended by a person who was in the sign industry for a long time,” she said.

Easy to Work With

Holly was impressed Christian was not only able to work with her and the PTA, but he was patient while she coordinated with AISD. There were many things to decide, such as where the electricity would be coming from. She also appreciated that he always did what he said he was going to do, was always on time to appointments, and that his quotes were near the actual cost.

When construction began on the marquee sign, it took only two weeks to complete. While the PTA at Baldwin Elementary has no immediate plans for another sign, Holly said, “If I did, I would go to Christian and recommend him to anybody in need of a sign.”

Marquee signs are just one type of sign CND Signs & Printing can create. Visit our portfolio for a full display of previous various sign projects.